The big frog sculptures emerged from work to develop a model system and medium to render human-size form in direct metal sculpture.  The beginning of the human-size copper frog goes back to 1974 when I, Charles Smith, started making metal sculpture (following a career in science and engineering).

My first subjects were clowns and dancers made with sheet copper overlaid with brass, and although they were one to two feet high, there was always the desire to make them life-size in direct metal.  This natural subject matter for me, coupled with the basic desire to render the life-size image of the human form in metal are the forces that led to the copper frog.  Without my realizing it the clowns and dancers and jesters “morphed” into the frogs.  This happened over a period of about three years during the mid-1980’s.  A client on Seabrook Island for whom I had made sculpture often asked me do a frog, as he and his wife were “frog lovers” and collected various frog images and sculptures.  The first frog was sitting on the ground, but was the size of a person.  After several big sitting frogs, I did a number of smaller frogs, I did a number of smaller frogs obtaining a better control of the medium.  Then they got bigger again, began to stand, and became involved in human activities.

“Aliveness” is a descriptive term often used to refer to my frog sculptures.  Frank Cabot (founder of The Garden Converancy) claims: “they have soul”.  He has placed fifteen of the creatures at “Les Quatre Vents” Gardens at Murray Bay, near Quebec in Canada.  Alston Glenn (director of Atlanta Botanical Garden, ret.) calls my work “crowd pleasers” and is responsible for seven pieces in their collection. I have made frog sculptures for public gardens and settings, schools, hospitals, and private collections all over the United States and in many foreign countries. 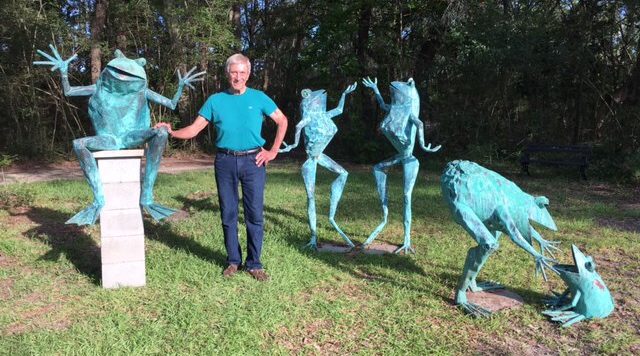